Recent debates on transgender inclusion in the UK and in the US have presented law with new challenges that will inevitably become   relevant for many other Western countries as well.  The proposed expansion of the category of «woman» to encompass those self-identifying as women, without the requirement of physical conformity, has been justified by arguments ranging across a spectrum from liberal sympathy for people who feel they are trapped in the wrong body, to acceptance that individuals may have been misidentified at birth and are in fact the opposite sex from the one they were originally «assigned», as the jargon puts it.  There is an intellectual gulf between these two views.  The one accepts that sex is biologically determined, but that it may be appropriate for the law to treat a person as a member of the other sex if that is what they need in order to flourish as an individual.  The other disputes the idea that sex is biologically determined.  It suggests that sex is decided by the way you feel – by the brain rather than the body.

The first view underpins the reasoning behind laws that seek to allow people to change their legal sex. For example, the Gender Recognition Act 2004 (GRA) in the UK allows the law to treat a person as someone of the other sex if they have obtained a Gender Recognition Certificate (GRC).  Possession of such a certificate allows the person to change their statement of sex on all official documentation such as birth certificate, driving licence and passport.  To obtain a GRC, a person must be at least 18, have lived as if a member of the opposite sex for two years, to intend to remain permanently in that gender, and to have a medical diagnosis of gender dysphoria.  Surgical modification of the body is not required.  The GRA creates a legal fiction whereby the person is thenceforth treated as a member of the opposite sex from their birth sex for many but not all purposes.  Legal fictions exist in areas where something known not to be true in reality is treated as truth for the purposes of law: for example, the personhood of companies.

Nevertheless, for some purposes, they retain characteristics of their birth sex that distinguish them from persons born into the acquired sex.  One obvious distinction is medical: a transgender woman’s needs will not map on to the gynaecological or obstetrics provision in a hospital, while a transman’s might.  The law also recognises some situations where the person with a GRC will not be encompassed within the new sex. The Equality Act 2010 allows for «sex» as well as «gender re-assignment» to be protected characteristics in order to preserve some spaces, such as changing-rooms and refuges, for those with female (or male) bodies alone.  This is a balancing exercise intended to meet the needs of those who claim other protected characteristics such as religion and in the interests of the social goal of women’s protection.

Those who argue that transwomen are women, rather than simply that they should be treated as women, want to do away with «sex» and «gender re-assignment» as separate protected characteristics and replace them with the single characteristic of «gender identity».  They have also campaigned to remove the requirement to obtain a medical diagnosis of «gender dysphoria» and treatment and to allow people simply to self-identify.  Those proposals were rejected by the British government in 2020.  Within the group advocating for such legal changes there are again different… 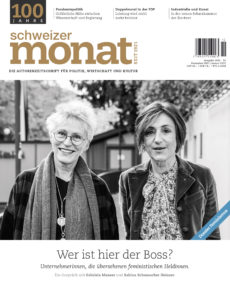 In the past decades, our understanding of sex and gender roles has significantly changed. If new laws cut all references to biology, disadvantages will inevitably follow for women.

Gender-critical feminism corrects the errors that go hand in hand with the socio-political popularization of the concept of gender.

Gender-critical feminism corrects the errors that go hand in hand with the socio-political popularization of the concept of gender.

The idée fixe of a sex unrelated to one’s body threatens feminist achievements und propels the hatred towards critical voices.